North Carolina Baseball Academy was founded in 1998 by 10 year Major League Pitcher Scott Bankhead. Scott has been the Director and Operator of NC Baseball since its inception on December 2, 1998. Scott has made helping young baseball players, on and off the field, his second career after he excelled in the sport for over 26 years. From little league to the major leagues Scott experienced every level of the game and after retirement decided to make paying his experience and knowledge of the game forward his lifelong work. Scott has helped develop 3 Major League players and hundreds of college baseball players in his 23 years in the Academy business. Scott is also very proud of the positive influence the NC Baseball Academy has had on young men who have used the game of baseball to get an education and to then transition into very productive citizens and community leaders.

Scott Bankhead is originally from Reidsville NC. Scott was an All-State Baseball player at Reidsville Senior High School in 1981 and was signed to play college baseball by the University of North Carolina as a RHP that same year. During Scott’s Collegiate career at UNC he set numerous records and helped lead the UNC baseball team to 3 straight ACC Championships. During Scotts 3 years at UNC he compiled an overall record of 24-3 and won a then ACC record 20 straight decisions over his final two years. Scott was named ALL- ACC First Team Twice and ALL AMERICAN Twice for his and the team’s success on the field. In 1984 Scott was a First Round Draft Choice of the KC Royals and a member of the 1984 Olympic Baseball Team that competed in the Olympic games in Los Angeles, winning a Silver Medal.

Scott began his professional baseball career in 1985 at the Double A level of the game and made 31 starts as a pitcher before being called to the Major Leagues in 1986. Scott played for 5 MLB teams ( KC Royals, Seattle Mariners, Cincinnati Reds, Boston Red Sox and the NY Yankees ) during his 10 year MLB career. Scott’s best record as a MLB pitcher was 14-6 in 1989 for the Seattle Mariners. Scott was fortunate during his MLB career to play with a future Hall of Fame player on each team he played for. 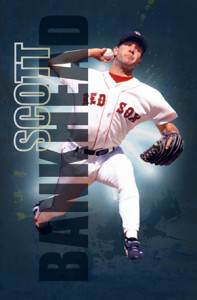